Happy October. 🎃 Well, I’ve survived week four of school. Naturally, the weekends mean I retreat into my little house and read and recover. I’ve also got the added advantage of seeing my lovely parents for my Mum’s birthday too. However, I’m still squeezing in reading time!

You may remember I decided to reread all the Harry Potter books. Well, I’ve managed to review all of them apart from the final one. So here goes! 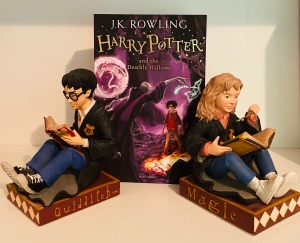 What’s it all about?

The novel begins with the aftermath of Dumbledore’s death. At this point, Voldemort is attempting to take control of the Ministry of Magic. At the same time Harry is about to turn seventeen years old which will result in him losing the protection he gained from his mother. Members of the Order of the Phoenix relocate to the Dursley’s and prepare to move Harry to the Burrow. For this, they need a plan and decide to use poly juice potion so they all look like Harry.

“The last words Albus Dumbledore spoke to the pair of us?’
Harry is the best hope we have. Trust him.”

Unfortunately, the Death Eaters seem to be aware that this was the plan and attack the party. Mad-Eye Moody and Hedwig are killed and George Weasley is severely injured. Voldemort arrives to finally kill Harry but Harry’s wand keeps the spells from Voldemort away.

Harry, Ron and Hermione prepare to search for the final four Horcruxes. They are also the benefactors of gifts from Dumbledore: a Golden Snitch for Harry, a Deluminator for Ron and The Tales of Beedle the Bard for Hermione. They also receive the sword of Godric Gryffindor which has the power to destroy Horcruxes but it is prevented by the Ministry of Magic.

“I’m going to keep going until I succeed — or die. Don’t think I don’t know how this might end. I’ve known it for years.”

Bill Weasley and Fleur continue with their wedding plans and the day of the wedding is the day the Ministry falls to Voldemort. The wedding is attacked by Death Eaters. Harry, Ron and Hermione flee to Sirius Black’s family home, 12 Grimmauld Place which now belongs to Harry.

Whilst here, Harry manages to work out that the late brother of Sirius, Regulus, had stolen the Horcrux locket and hid it somewhere in the house. Unfortunately, this was then stolen by Mundungus Fletcher. The house elf, Kreacher, locates Fletcher but he reveals that the locket has been stolen by Dolores Umbridge.

The trio decide to infiltrate the Ministry and steal the locket from her but as they escape, Ron is injured and Grimmauld Place is now compromised. The three are forced to hide in the wilderness, with only their spells to protect them. No matter what they try, they are unable to destroy the locket. Time ticks by before they realise the negative effect the locket has on them. It leads to the desertion of Ron, leaving Harry and Hermione left to continue alone.

During their time together, Harry and Hermione learn about Dumbledore’s past, including the death of his sister Ariana and his connection with the dark wizard, Gellert Grindelwald. They travel to Godrick’s Hollow, Harry’s birthplace. There they meet the historian, Bathilda Bagshot. However, they soon realise that all isn’t as it seems. The real Bathilda has been killed and replaced with Nagini, who attacks them.

The two manage to escape but Harry’s wand is damaged beyond repair in the process, leaving him immensely at risk. A few days later, a doe Patronus guides Harry to a pond where he sees the Gryffindor sword. When Harry tries to to get the sword, the locket also nearly kills him. What’s more surprising is the Deluminator guides Ron back to Harry and saves him. He also manages to destroy the locket with the sword. Another Horcrux down…

Hermione is certain there is a reason why Dumbledore left her the book. The penny drops and Hermione spots a symbol that they have seen before, on an item that Luna Lovegood’s father, Xenophilius, has worn. They visit him and he eventually shares with them the symbol and what it represents: The Deathly Hallows. It contains the Elder Wand (an unbeatable wand), the Resurrection Stone (which can summon the dead) and the infallible Invisibility Cloak.

Xenophilius acts incredibly strangely and they soon realise that he has summoned the Death Eaters to catch them, in exchange for Luna’s freedom. The three manage to escape but Harry works out that Voldemort is hunting for the Elder Wand. This wand has been passed to Dumbledore after he defeated Grindenwald. Finally the pieces come together. The third Hallow is in his own Invisibility Cloak and the Snitch contains the Resurrection Stone.

A slight problem follows as they are captured and taken to Malfoy Manor. Bellatrix tortures Hermione, believe they stole the sword of Gryffindor from her vault at Gringotts. With the help of Dobby the house elf, Harry’s friend, they escape to Bill and Flyer’s house along with fellow prisoners, Luna, Mr Ollivander, Dean Thomas and the goblin Griphook. During the escape, Peter Pettigrew is killed for showing an ounce of mercy towards Harry. The absolute worse part for me was the death of Dobby.

Harry’s visions continue and the next is of Voldemort stealing the Elder Wand from Dunbledore’s tomb. Time is running out so the trio then decide to break into Bellatrix’s vault, believing that another Horcrux is hiding there. With Griphook’s help, they manage to break into the vault. There they retrieve the cup of Hufflepuff and escape on a dragon.

Amongst the chaos, it gave Griphook an opportunity to steal Gryffindor’s sword. Harry has another vision of Voldemort being informed of the break in. Enraged, he decides to check on Horcruxes, revealing to Harry what the final two are: Nagini and one at Hogwarts.

This makes the decision easy for them and they head to the beloved school. It wasn’t easy as Death Eaters are everywhere but make it with the help of Aberforth, Dumbledore’s brother. Voldemort is alerted to Harry’s whereabouts and decides to mount an attack on the school. The teachers and students alike defend the school whilst Harry, Ron and Hermione destroy the cup with the basilisk fangs from the Chamber of Secrets.

Harry discovers the final Horcrux and heads towards the Ravenclaw tower looking for the diadem. It is located in the Room of Requirement but in the process they are ambushed by Draco, Crabbe and Goyle. Crabbe attacks using a cursed fire but is unable to control it. The fire kills him and in turn, destroys the diadem. In the meantime, a number of characters are killed in the Battle of Hogwarts.

Voldemort is becoming increasingly annoyed that the Elder Wand isn’t performing as he expected it to. His reasoning is that Snape is the true owner of the wand as he is the one who killed Dumbledore. Voldemort murders Snape but Snape dies just as Harry arrives. Snape gives Harry his memories for him to see through the Pensieve.

These memories show a completely different side to Snape that no one expected. What appeared on the surface as absolute dislike for Harry, has roots in much more complicated grounds. Snape was a double agent, continuously watching over Harry and his friends, conjuring the doe Patronus because he was in love with Lily. We also learn that Dumbledore was dying after mishandling the ring Horcrux. His death with Snape was planned all along.

‘Dumbledore watched her fly away, and as her silvery glow faded he turned back to Snape, and his eyes were full of tears.
“After all this time?”
“Always,” said Snape.‘

Harry also now realised he is the final Horcrux, unbeknownst to Voldemort, and must die at Voldemort’s hands to render him mortal. Harry gives himself up and instructs Neville Longbottom to kill Nagini. Harry embraced his fate and takes the Resurrection Stone to reunite himself with his dead parents and Sirius. Voldemort casts the killing curse on him.

What comes next is a dreamlike state where Harry is greeted by Dumbledore. He tells Harry about the original killing curse and how it left a fragment of him creating a connection but now the killing curse has been cast again, that fragment has been killed. Dumbledore also admits that his friendship with Grindelwald caused the death of his sister and estrangement from his brother.

Following this, Harry decides to beat death and head back for Hogwarts to end this for once and for all. He pretends to be dead and Voldemort buys it. Neville pulls the sword of Gryffindor out of the Sorting Hat and beheads Nagini.

Harry hides under his cloak as the battle rages on. Bellatrix is killed by Molly Weasley and Harry then shows himself to Voldemort. He explains how the Elder Wand’s loyalty transfers upon defeat, not the killing. Therefore, the previous master, was Draco not Snape. Harry then disarmed Draco at Malfoy Manor which means that Harry is the master of the Elder Wand.

“Not my daughter, you bitch!”

In retaliation, Voldemort attempts the Killing Curse on Harry but the spell rebounds, killing him. Harry used the Elder Wand to repair his own wand, intending to return the Elder Wand to Dumbledore’s tomb. He keeps his Invisibility Cloak and leaves the Resurrection Stone as forever lost. The wizarding world can live in peace forever more.

19 years later and once again we are on Platform 9 3/4s. The difference now is that we are seeing the children of the trio head to school. Harry and Ginny have three: James Sirius, Albus Severus and Lily Luna. Ron and Hermione have two: Rose and Hugo. Albus is worried he will be sorted into Slytherin. Harry tells him all about Snape’s bravery and that the Sorting Hat would consider his wishes. The novel ends.

It’s really no secret how much I genuinely love the Harry Potter series. I felt the same sadness that I felt when I finished it the first time round as a geeky kid who grew up with this. I still cry when I think about the death of Dobby. (I know, it’s silly! But he’s just too adorable!!) It’s a book I desperately try and get the kids in my school to read. It’s a book I try and reference as much as I possibly can as it is just magical. Every page is magical. There’s not been anything like it and I doubt there ever will be in my lifetime.

Thanks for sticking with me as I relieved this series. I hope you loved it as much as I did.

36 thoughts on “Harry Potter and the Deathly Hallows – J.K. Rowling”