I hope you’ve been basking in the beautiful sunshine today. It’s glorious out there! Spring is in the air and boy is it fabulous!

Time for my choice of book for the Waterstones Book of the Month. There was one book for March that just grabbed my attention which, as a result, meant that the others didn’t get a look in! That is If I Die Before I Wake by Emily Koch. 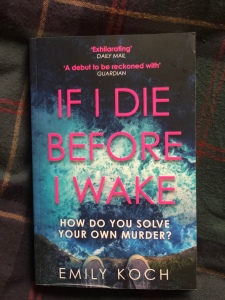 Unlike my other reviews, this won’t be as detailed and thorough with the plot. I wouldn’t want to give anything away and ruin it for you! I hope you enjoy.

What’s it all about?

The novel centres around the first person narration of Alex. Unfortunately for Alex, two years ago he was involved in a rock climbing accident. As a result, he is living in a permanent vegetative state. However, we as a reader get an insight into Alex’s internal dialogue. He goes through phases of utter despair, depression, frustration, positivity and everything in between.

“I’ve always been fighting, since the moment I woke up in hospital. But I haven’t always been on the same side of the battle lines.”

However, he does have access to some of his senses. He can see a little through the slits in his eyes. He can hear exceptionally well and can smell too. It’s his sense of smell that enables him to work out who is in his hospital room and when.

‘She only has to walk into my room and I feel a little bit better. For a start, she smells motherly and comforting, like marzipan -‘

Since Alex’s fall two years ago, he has remained in an unresponsive state, according to the doctors treating him. To begin with, because of the pain he could see his family going through, he decides it would be better to die. However, the more various family members and his girlfriend, Bea visits, the more he wants to show them he’s alive inside. He desperately tries to move, to focus on one point to get it moving, even if just for an inch.

As the novel progresses and time passes by, his family have to make the incomprehensible decision whether or not to turn off his life support machine. His parents, sister and girlfriend push for continuous medical tests. All the results show the same: nothing. Unresponsive. They continue to hold on.

Whilst everyone involved are in agony, Alex’s internal agony is so much worse. He can hear all the discussing about what decision to make regarding Alex’s current position. Eventually, they agree that it is time to move on and let him go. Alex knows that this will result in his life and there is absolutely nothing he can do about it.

‘I must have exhausted myself after several hours of panic. I found I was asleep, trapped in the same vision – watching from the corner of our flat, trying to help her, trying to shout to her but realising that saline drip lines bound my wrists and ankles, and the sponges used to clean my mouth were stuffed into it, gagging me.‘

Whilst heating the conversations about his impending death, Alex doesn’t have the energy to communicate (or try to) that will make the doctors and his family pay attention.

Something is different though, Alex has got some new visitors: the police. Recently, they have been around Alex’s hospital trying to unearth clues and information regarding Alex’s rock climbing accident. It appears that accident isn’t quite the correct word to describe what had happened to him.

‘The question I would have asked myself back then, if I’d known what I know now, was: But what if it wasn’t fate that made you fall?’

Alex has all the time in the world lying there to try and work out what happened to him. Everything is a blur though. His memories are severely damaged, if not gone. Yet, he still tries. He has a unending sense that something bad is happening with Bea too. The two link together in his mind and we see utter frustration from Alex because there isn’t nothing he can do apart from think.

Alex knows that he needs to use the senses he does have to try and work out what happened to him. As the pages fly by, time is running out for Alex (and everyone else) to solve the mystery of what exactly happened to him. After all, murder is a crime and Alex‘s accident might not be an accident at all. Time is running out for them all. This needs solving before they can say their last goodbyes.

“And so, I hope if you can hear me, you will forgive me…After I read this to you, I’m going to talk to your dad. You know what I’m going to say to him.”

Everything Alex’s character felt, I felt. I desperately wanted to shout and scream and get people to see what I was reading. A novel like this makes me feel great allegiance with the tragic character. Emily Koch did an amazing job at giving someone in a vegetive state a voice. Every nuance, every feeling was well thought out. I was gripped until the very end. I don’t want to ruin this for you but I urge you strongly to go and read it. You won’t be disappointed.